6mm wargaming? Well I used to do that quite a bit. Going back thirty years it was practically all I did. Timing is becoming my thing at the moment so this is about a month out of date but I went to the Joy of Six recently. It's not really my thing now but a few of my mates, and one in particular, are still keen. So having done my duty in the morning, the thought in my head was "what the hell". It was on the cards anyway. 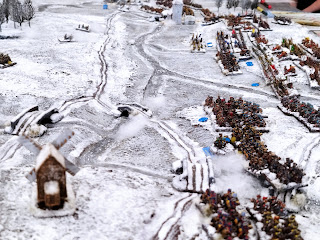 I enjoyed the show. Some pretty stuff there. I got several ideas. More about the terrain than the figures. I spoke to a lot if people from the world of internet wargaming. So had a nice time there.

For some reason I did not buy anything aside from food and a drink. I was looking at the idea of brigade games' Imperial Skies. If I got two forces I could probably find another player. As my paint queue of 28mm stuff is at least four years, if I only include what is painted and based. I would to think how long the rest would take.

Given that I am more into the idea of gaming in a more compact area, 6mm has a lot of appeal. There has  been a lot of growth in the area and it now covers a number of areas I am interested in. Skirmish is still winning, I have pretty much everything I need for that but I am always open to a change. The fact that I still need two armies kind of puts me off.

Polemos rules seem pretty good to me. They have worked for Napoleonics and I imagine they will be fine for the other two mass battle periods that I like the idea of, ACW and ECW, would probably also work. Give that I like the idea of making everything smaller I would like to make the 60mm square bases smaller, 40mm or 30mm. As I am working on the premise of using skirmish sized tables, this would allow me to get biggish battles on the table.

The last gaming that involved 6mm was a Napoleonic game. The plan was to refight the entire The Napoleonic Wars using a boardgame of that name as a campaign structure. That might sound impressive, if not stupid. The plan was big but the forces involved would not have been that high in reality. I was going to be the French and I was figuring £200 would have given me absolutely everything and a few allies. So I spent most of that. I think I was a bit light on artillery but that was about it.

So I started painting. After arguments about rules and basing we started to make progress. Then it petered out. Every now and again I paint a few more bases. Just to keep my hand in really. It's something I wouldn't mind going back to. I play about with the idea every couple of years and I drag a few minis out for some out for painting. As I recall it's the Hussars that have the most interesting uniforms so they get the most attention.

Somewhere there is a part of me that would love to get back into this scale. The idea revolved around using the boardgame, The Napoleonic Wars, as a background. It's already a pretty enjoyable game. I play Napoleon so I do pretty well all the way along, right almost to the end. We had played our way through this a couple of times. This wasn't going to be an every week game but it was an opportunity to get together and make an event of it. Personally I could have see this going on longer than the actual war. Everyone was picking a side, getting the figures. It just kind of fizzled out.